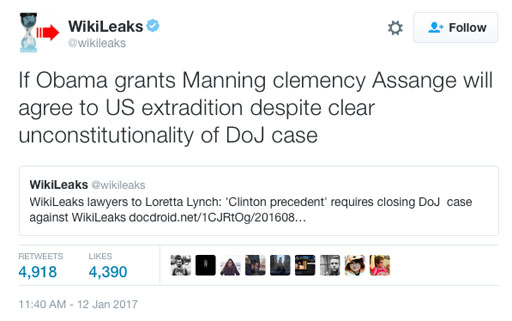 Last week, Wikileaks tweeted that if  President Obama were to grant Chelsea Manning clemency, Julian Assange would agree to US extradition.

Yesterday Obama commuted Manning’s 35 year sentence to 7 years,  with release in May of this year. The White House did not indicate that Manning’s commutation was related in any way to Assange.

That being said, it’s no surprise today that Wikileaks and Assange have now reneged on their offer.

The lawyer for Julian Assange said President Obama’s commutation of Chelsea Manning’s sentence does not meet the conditions of the WikiLeaks head’s offer to be extradited to the United States if Manning were pardoned. Obama on Tuesday commuted Manning’s sentence for leaking diplomatic cables to WikiLeaks, leading many to wonder whether that meant Assange was ready to surrender to the Department of Justice.

“Mr. Assange welcomes the announcement that Ms. Manning’s sentence will be reduced and she will be released in May, but this is well short of what he sought,” said Barry Pollack, Assange’s U.S.-based attorney, via email. “Mr. Assange had called for Chelsea Manning to receive clemency and be released immediately.”

Assange has not been publicly charged with a crime by US authorities, but his team maintains that charges are likely “under seal” – a tactic in which charges are kept secret in order to prevent suspects from fleeing. The White House yesterday denied that Manning’s commutation had anything to do with Julian Assange.