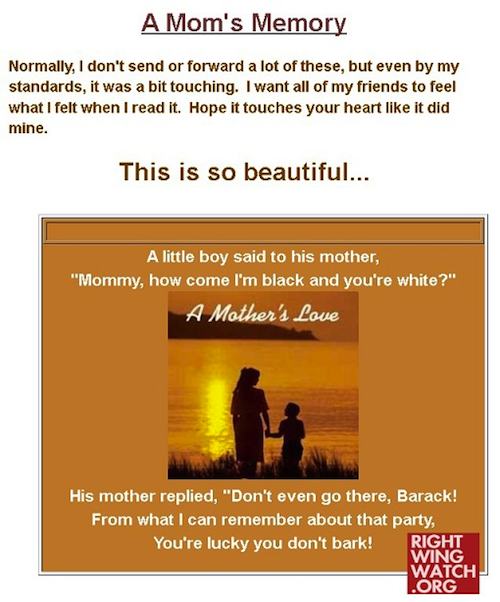 He says he’s not a racist, and adds that he sent it because he is not a fan of the President.

The email compares African-Americans to dogs, or, alternatively, suggests President Obama’s mother had sexual intercourse with a dog, reads:

“Normally I don’t send or forward a lot of these, but even by my standards, it was a bit touching. I want all of my friends to feel what I felt when I read this. Hope it touches your heart like it did mine.

“A little boy said to his mother; ‘Mommy, how come I’m black and you’re white?’” the e-mail joke reads. “His mother replied, ‘Don’t even go there Barack! From what I can remember about that party, you’re lucky you don’t bark!’”

Judge Cebull did not write it but forwarded it.

Judge Cebull gave this explanation to John S. Adams of the Great Falls Tribune, who broke the story:
“The only reason I can explain it to you is I am not a fan of our president, but this goes beyond not being a fan,” Cebull said. “I didn’t send it as racist, although that’s what it is. I sent it out because it’s anti-Obama.”

It’s one thing to criticize President Obama’s policies or leadership or even his character. But to insult his mother and equate interracial sex with bestiality? SRSLY? And this from a federal judge…