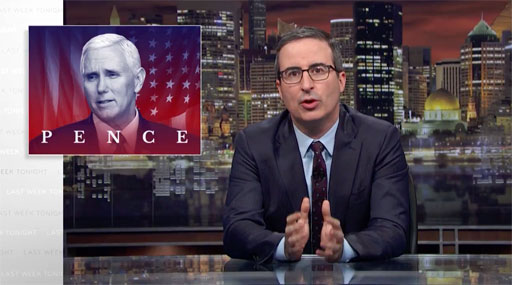 About the only thing Oliver could find to like about the veep is his pet rabbit, Marlo Bundo.

Bundo is so popular that the vice president’s daughter, Charlotte Pence, wrote a book about the bunny which was illustrated by second lady (and watercolor artist) Karen Pence.

The publisher says the tome “gives young readers a bunny’s-eye view of the special duties of the vice president.”

In order to spotlight the LGBTQ rights Pence so virulently opposes, Oliver trolled Pence with a parody book, A Day in The Life of Marlon Bundo, wherein a bow tie wearing Marlon meets and falls in love with another gay bunny but runs into obstacles when they try and marry.

“Please buy it for your children; buy it for any child you know, or just buy it because you know it will annoy Mike Pence,” says Oliver. “You’d be doing a nice thing, in a really dick-ish way. And isn’t that the dream, at the end of the day?”

You can watch the segment below. The section on Bundo begins around the 14:10 mark.