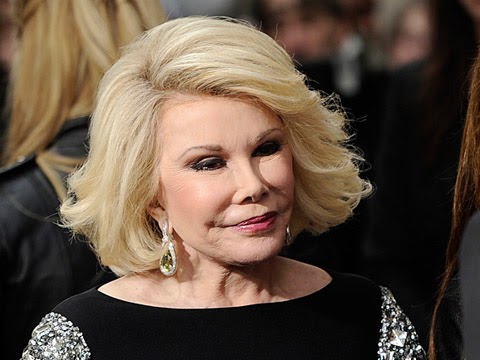 According to reports, Joan Rivers is resting comfortably in a medically induced coma after a near-fatal incident at an Upper East Side clinic where the comic superstar suffered respiratory failure.

Rivers was rushed to Mount Sinai Hospital, where her daughter Melissa is by her side:

Her daughter, Melissa Rivers, dashed from LA to New York and arrived at the hospital at around 8pm and was ushered to the 11th floor luxury room in which her mother is now said by doctors to be in a stable condition.

She released a statement thanking everyone for their messages of support and gave a brief update on her mother’s condition.

‘I want to thank everyone for the overwhelming love and support for my mother,’ Melissa Rivers said in a statement.

‘She is resting comfortably and is with our family. We ask that you continue to keep her in your thoughts and prayers.’