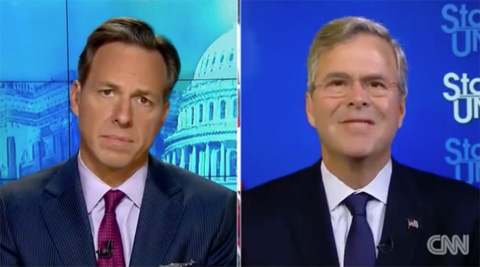 Jeb Bush keeps up his attacks on Donald Trump after the Donald said Bush bro George W. bears responsibility for 9/11.

Appearing on CNN’s “State Of The Union” with Jake Tapper:

“My brother responded to a crisis, and he did it as you would hope a president would do. He united the country, he organized our country and he kept us safe. And there’s no denying that. The great majority of Americans believe that…And I don’t know why he keeps bringing this up. It doesn’t show that he’s a serious person as it relates to being commander in chief and being the architect of a foreign policy…I mean, so next week, Mr. Trump is probably going to say that FDR was around when Japan attacked Pearl Harbor. It’s what you do after that matters. And that’s the sign of leadership.”

First of all – “it’s what you do after that matters.”

Jeb, no. It’s keeping America safe before an attack. While I don’t hold George W. personally responsible, there is the small matter of the Presidential Daily Brief of August 6, 2001 which the Bush administration ignored, 36 days before the attacks.

In addition, the pesky FBI report about mideast citizens with ties to terrorist groups taking flying lessons in the U.S.

And then, to say Hillary Clinton is responsible for the deaths of four Americans in Libya? Isn’t it “what you do after that matters,” Jeb?