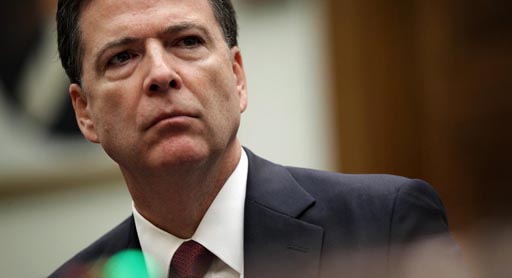 During a Q&A session at Manhattan’s 92nd Street Y in New York City on Sunday night, former FBI Director James Comey told the audience that the answer to the scandal-ridden Trump administration is voting him out in a landslide in 2020, not impeachment.

“All of us should use every breath we have to make sure the lies stop on January 20, 2021,” Comey told an audience at the 92nd Street Y on New York City’s Upper East Side. He all but begged Democrats to set aside their ideological differences and nominate the person best suited to defeating Trump in an election.

Comey said he hoped that Trump would be swept out of office without being impeached. Framing the rise of Trumpism as a political ill the country needed to exorcise at the ballot, he expressed a hope that Americans would “in a landslide rid ourselves of this attack on our values.”

“Removal by impeachment would muddy that,” he said, and potentially leave a third of the country feeling like their chosen leader had been removed in a “coup.”

For what it’s worth, I wholeheartedly agree.

First, even though a Democratic-led House of Representatives might vote for articles of impeachment, the Republican-controlled Senate would never vote Trump out.

Second, the democratic process would be viewed as a much more widespread solution than, as Comey says, a Trumper-viewed ‘coup.’

Former FBI Director James Comey says American voters should end Donald Trump’s presidency with a “landslide” victory for his opponent in 2020: “All of us should use every breath we have to make sure the lies stop on January 20, 2021” https://t.co/2OFn1ZLqMk pic.twitter.com/l0KdMUf1MF