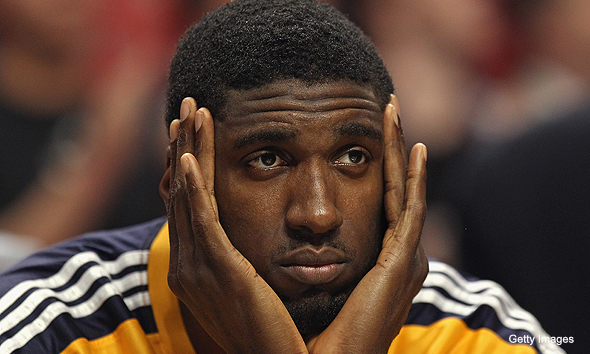 This weekend Indiana Pacers center Roy Hibbert made news at a post-game press conference by using anti-gay slang “no homo.”  The NBA has now announced it will fine Hibbert a sizeable chunk  of coin for his choice of words:

The N.B.A. fined Indiana Pacers center Roy Hibbert $75,000 Sunday, hours after Hibbert apologized for using an antigay slur and an obscenity in a news conference after his team’s victory against the Miami Heat in Game 6 of the Eastern Conference finals.

Hibbert apologized in a statement yesterday, saying “I used a slang term that is not appropriate in any setting, private or public, and the language I used definitely has no place in a public forum, especially over live television. I apologize to those who I have offended, to our fans and to the Pacers’ organization. I sincerely have deep regret over my choice of words last night.”