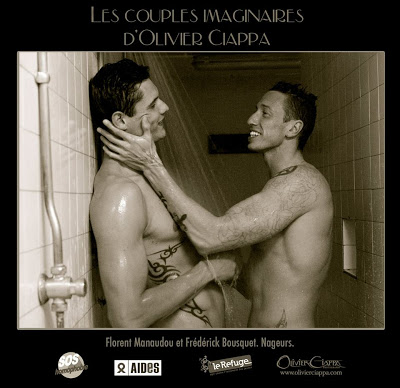 Pink News reports on a new campaign to address homophobia:

Two male French Olympic swimmers have posed in an intimate shot as an “imaginary couple”, as part of a campaign to tackle homophobia, which also features images of Eva Longoria and Lara Fabian. Florent Manaudou and Frédérick Bousquet, posed in the photo, taken by Olivier Ciappa, who also started the campaign.

The project is called “imaginary couples”, and includes shots of other models, featuring the caption: “A peaceful look on homosexuality”, and features the “couples” asleep in each other’s arms, or in intimate, happy situations.

More photos at the link.