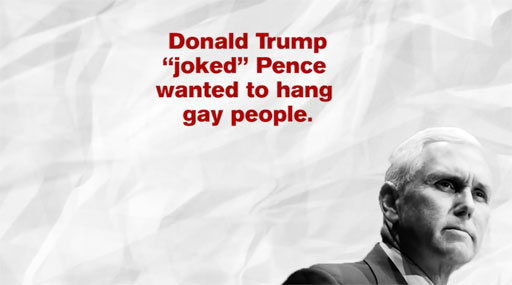 As Donald Trump holds court on a daily basis in the nation’s political spotlight, the chant of impeachment has been heard in some corners.

But the reality of a Trump impeachment means an almost certain President Mike Pence.

As the Human Rights Campaign points out, a Pence presidency would present clear danger to the LGBTQ community.

“Mike Pence has made a career out of attacking the rights and equal dignity of LGBTQ people, women and other marginalized communities.

“Now as vice president, he poses one of the greatest threats to equality in the history of our movement.

“With the world distracted by Donald Trump’s scandal-ridden White House, Mike Pence’s nefarious agenda has been allowed to fly under the radar for too long. He has become not only the most powerful vice president in American history, but also the least scrutinized.”

The HRC has compiled a new report on Pence’s woeful history on LGBTQ rights and policies, and assembled the information in a new microsite to shine a spotlight on Pence’s inside-the-White House efforts to continue his decades-long crusade by leading the Trump/Pence administration’s attacks on LGBTQ people, including those who bravely serve our nation in the military.

• Support for the practice of so-called “conversion therapy”

Watch the new video below from the HRC which summarizes Pence’s poisonous positions on LGBTQ policies.

And visit the HRC’s new site for more info on “The Real Mike Pence.”