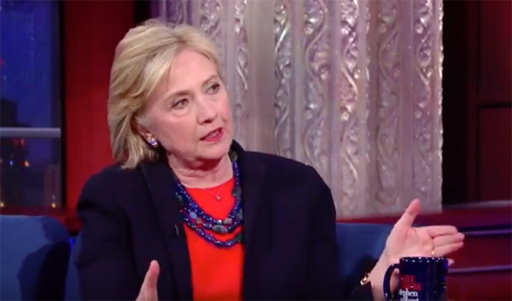 Appearing on The Late Show last night, Democratic front-runner Hillary Clinton was asked if she would allow big banks to fail should the country face a similar crisis as happened in 2007.

“First of all, under Dodd-Frank, that is what will happen because we now have stress tests and I’m going to impose a risk fee on the big bank if they engage in risky behavior,” she elaborated. “But they have to know, their shareholders have to know that yes, they will fail. And if they’re too big to fail then under my plan and others that have been proposed, they may have to be broken up.”

“Because if you can’t manage it, it’s more likely to fail,” she said.

I should also make note of the fact that Hillary consistently includes LGBT rights in her stump speeches and interviews. What a world of difference in politics in only a few years.

Watch a clip from the appearance below.