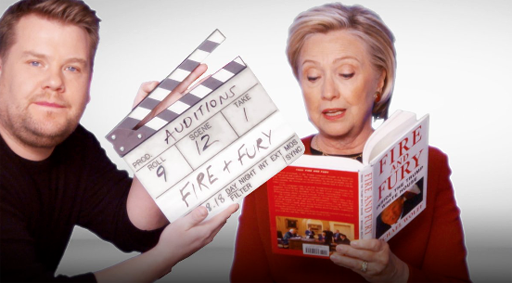 In a skit during last night’s Grammy Awards, several celebrities “auditioned” to the be the narrator’s voice for an upcoming audio book version of Michael Wolff’s explosive #1 best-seller, Fire and Fury: Inside The Trump White House.

Cher, John Legend and Snoop Dogg were among the hopefuls, but it was a cameo by Hillary Clinton that triggered a lot of snowflake conservatives.

“One reason why he liked to eat at McDonald’s,” Clinton reads from the book, “nobody knew he was coming and the food was safely premade.”

On the hunt for a GRAMMY Award of his own, James Corden auditions celebrities for the spoken word version of Michael Wolff’s “Fire and Fury.” pic.twitter.com/SjTobAbv2N

Getting to read a #fakenews book excerpt at the Grammys seems like a great consolation prize for losing the presidency. #GrammyAwards

I have always loved the Grammys but to have artists read the Fire and Fury book killed it. Don’t ruin great music with trash. Some of us love music without the politics thrown in it.

I have always loved the United States but to have a criminal read the Oath of Office killed it. Don’t ruin great countries with trash. Some of us love our country without the grifters thrown in it https://t.co/jeHV2riTwK

Gotta love it when pop stars and rappers act like they are the moral authority and compass for the country. Mhmm. Sure. #grammys

Gotta love it when American musicians exercise their First Amendment rights to express sincere concerns about the country they love. Mhmm. #Grammys https://t.co/0HaEIFFlqi

Please do not tell Nikki Haley that the Oscars are March 4th because I don’t want to ruin movies for her and her family just in case the awards show gets political.

Hillary Clinton reading a book at the Grammys really triggered Trump world!! Don Jr, Nikki Haley and Fox Friends were all so angry they lashed out. Awww, poor snowflakes!! Every time we piss off a Trump supporter an angel gets their wings!

The most unexpected win at the #grammys had nothing to do with music. pic.twitter.com/qyW9FaTgAn

Clinton’s #Grammys cameo + cheers + outrage = The latest sign the country will never really get over the 2016 election? https://t.co/mGLpz9TT6o