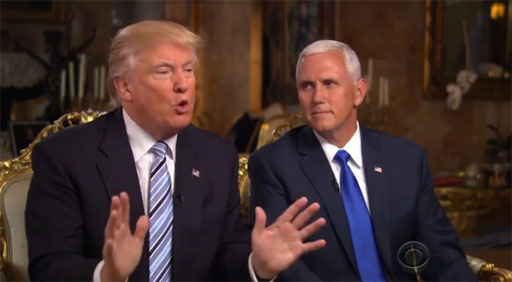 A few highlights from the very first interview of Donald Trump with his newly-minted running mate, Indiana Gov. Mike Pence from last night’s 60 Minutes on CBS.

It comes as no surprise that Trump dominated the discussion throughout, leaving Pence only the occasional smile and nod.

One of the more curious moments is when CBS News” Lesley Stahl points out that Pence voted for the Iraq war, something that Trump has repeatedly criticized Democrat Hillary Clinton for.

Trump seems to ignore the contradiction.

Trump: “He’s entitled to make a mistake every now and then.”