The Daily Beast is reporting that Herschel Walker, former NFL player and current candidate for the U.S. Senate in Georgia, who has spoken out against fatherless households (specifically in the Black community), has a second son he’s never publicly acknowledged.

SCOOP: Herschel Walker has a secret 10-year-old son, who he doesn’t see.

He also repeatedly rails against fatherless homes in the Black community, and says the greatest achievement of his life is being a good dad. Me @thedailybeast https://t.co/V8POVHbOJP

Walker—who co-parented his 22-year-old son, Christian with both his ex-wife and current wife—told right-wing internet personalities Diamond and Silk that if you have “a child with a woman, even if you have to leave that woman… you don’t leave the child.”

What Walker hasn’t publicly acknowledged is that he has a second son, who has apparently been estranged from his biological father since his birth a decade ago.

The son, whose name The Daily Beast is withholding out of privacy concerns, has grown up more than 1,500 miles from Walker’s Texas home.

And the mother, whose name we are also withholding for privacy reasons, had to take Walker to court a year after giving birth in order to secure a declaration of paternity and child support.

The Daily Beast goes on to note that while Walker sends Christmas and birthday presents, he has not played an active role in raising his second son.

Also, the young boy has not met or spoken with his half-brother, Christian, according to a person close to the boy’s family “with direct knowledge of the facts.”

Walker was hit with a paternity suit, in which he admitted being the father. He pays child support, but according to a person close to the family, sends Christmas & birthday gifts. He doesn’t see the son, who still hasn’t met his older half-brother

“Herschel had a child years ago when he wasn’t married. He’s supported the child and continues to do so. He’s proud of his children. To suggest that Herschel is ‘hiding’ the child because he hasn’t used him in his political campaign is offensive and absurd.”

Paradise also tried to deflect by referencing Walker’s opponent, Sen. Raphael Warnock (D-GA), who is currently involved in adjusting child custody and support arrangements with his ex-wife since being elected to office.

While it’s certainly very sad that Walker hasn’t played an active role in his second son’s life, what makes the revelation eye-brow raising is his many comments in the past about fathers needing to be there.

Roger Sollenberger, who wrote The Daily Beast piece, researched the many times Walker has spoken about the responsibilities of fatherhood which don’t seem to jive with the news of his younger son today.

Read the full article at The Daily Beast.

Here are some of the many, many, many remarks Herschel Walker has made about being a father.

To Diamond and Silk in 2020: If you have “a child with a woman, even if you have to leave that woman… you don’t leave the child.”

To Charlie Kirk the next month: “And I want to apologize to the African-American community, because the fatherless home is a major, major problem,” adding that he had been “like a father to some of those kids that had never had fathers.”

In 2017, Walker reflected fondly on his relationship with his son Christian, advising his audience, “if you got a child, hug your child every day.”

A year later, Walker said parental involvement is “very, very important,” as was “adults getting involved with kids, because some kid do not have a parent, a mother or a father.”

“So I don’t think I want to leave that kid behind. I want to be involved with him as well.”

He was once asked: “What about teaching our Black men that if you lay down with a woman and you make a baby, it is your responsibility to stay there and make sure that child is raised?”

Sollerberger also notes that first son, Christian Walker, who has announced he isn’t “gay” – he just likes to have relations with men – tweeted six days ago: 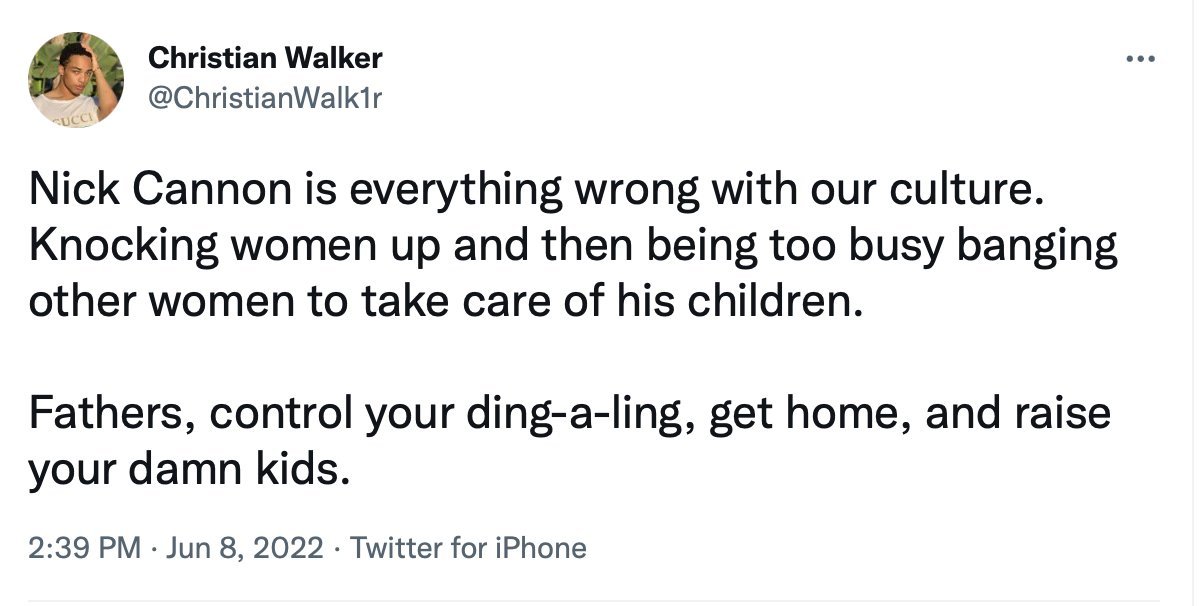 Walker has claimed he founded a veterans charity when, in fact, he was hired to be a spokesman for the organization ten years after it was launched. And it’s not a “charity” for veterans.

He’s also claimed he’s worked in law enforcement and been a member of the FBI. Recently, he told the press that Donald Trump never asked him to run for Senate even though the former guy takes credit for his candidacy.