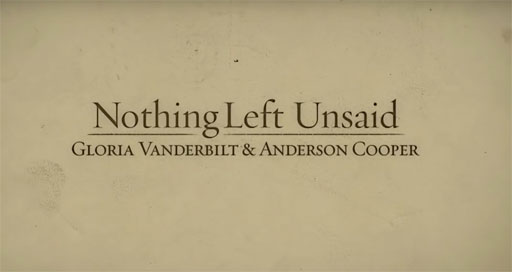 I will be watching this. Not for the tabloid, “watching the wealthy” aspect but for the introspective look into what the lives of those we “think” have everything might really be like.

Born into one of the wealthiest and best-known families in American history, Gloria Vanderbilt has lived in the public eye for more than 90 years, unapologetically pursuing love, family and career, while experiencing extreme tragedy and tremendous success side by side. Directed by Liz Garbus, the poignant and revealing feature-length documentary Nothing Left Unsaid: Gloria Vanderbilt & Anderson Cooper features a series of candid conversations as Vanderbilt and her youngest son, Anderson Cooper, look back at her remarkable life.

Intertwining archival footage and previously unseen home videos spanning eight decades with present-day scenes, the film paints an intimate portrait of one of America’s most fascinating families. Cooper and Vanderbilt tell the story of their past and present, losses and loves, and show how, in life, patterns repeat themselves in the most unexpected ways.

Drawing on Gloria Vanderbilt’s private archive of letters, home movies, photos and artwork created by her over the years, as well as vintage news footage and newspaper clippings, Nothing Left Unsaid is a journey through a life like no other. Son Anderson Cooper explains, “She’s got this public face, but the reality of her life is so different.”