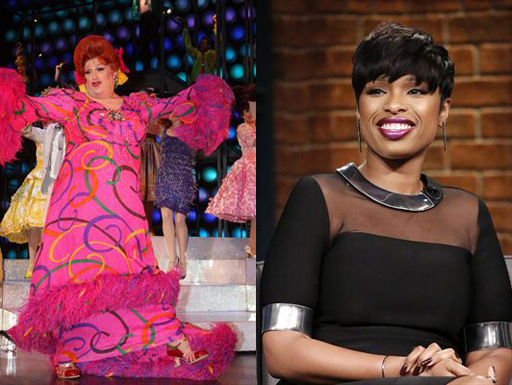 Most excellent casting news for the upcoming live presentation of the Broadway smash-hit Hairspray.

Not only will Academy/Grammy/Golden Globe winner Jennifer Hudson take on the role of “Motormouth Maybelle” (and her show-stopping “I Know Where I’ve Been”), but Tony Award winner Harvey Fierstein will reprise his leading role of “Edna Turnblad.”

In my opinion, there’s never been a better “Edna.”

“We are beyond thrilled with this incredibly talented duo of stars for ‘Hairspray Live!,’” said Robert Greenblatt, Chairman, NBC Entertainment. “Harvey Fierstein created the role of Edna Turnblad on Broadway in an indelible Tony-winning performance that demanded to be memorialized on film, and we’re happy he wanted to step into her shoes one last, unforgettable time. We’re also so grateful that the incomparable Jennifer Hudson will play Motormouth Maybelle and we know her rendition of ‘I Know Where I’ve Been’ will literally stop the show.”

Based on the Tony Award-winning Broadway musical, “Hairspray Live!” takes place in 1962 Baltimore. Teenager Tracy Turnblad’s dream is to dance on “The Corny Collins Show,” a local TV program. When, against all odds, Tracy wins a role on the show, she becomes a celebrity overnight and meets a colorful array of characters, including the resident dreamboat, Link; the ambitious mean girl, Amber; an African-American boy she meets in detention, Seaweed; and his mother, Motormouth Maybelle, the owner of a local record store. Tracy’s mother is the indomitable Edna Turnblad, and she eventually encourages Tracy on her campaign to integrate the all-white “Corny Collins Show.”

Harvey Fierstein, who is also writing the teleplay, will play Edna Turnblad, a role he created and won a Tony Award for in the stage version of “Hairspray.” The quintessential Edna, Fierstein portrayed the character for the show’s first two years of its seven-year run at the Neil Simon Theatre on Broadway.

The production will air live on NBC on December 7th at 8PM ET/PT.