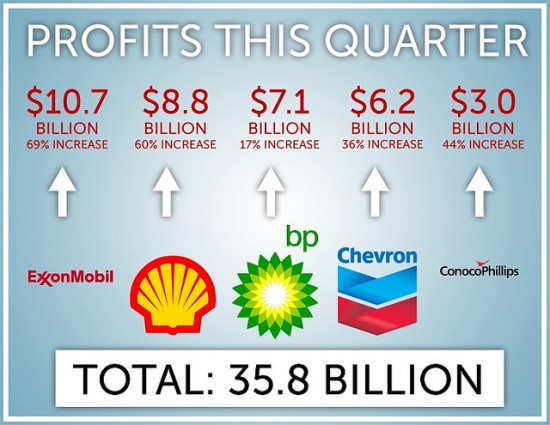 Via JMG:Even though the major oil companies are turning in world record quarterly profits, today the GOP members of the Senate killed a bill to repeal their massive multi-billion dollar tax subsidies.  Apparently, even with all the money the oil companies are making, they need tax dollars to get by:

Senate Republicans, including Scott Brown of Massachusetts, today foiled President Obama’s plan to strip $24 billion in tax subsidies from the country’s largest oil companies, potentially fueling an election-year issue among voters disgruntled by escalating gas prices. The 51-47 vote was mostly along party lines. Most Democrats, including Senator John Kerry, voted in favor of eliminating the subsidies but fell far short of the 60 votes needed to withstand a filibuster. Only Republican Senators Olympia Snowe and Susan Collins, both of Maine, joined the Democrats. Four Democrats — Jim Webb of Virginia, Mary Landrieu of Louisiana, Ben Nelson of Nebraska and Mark Begich of Alaska — voted against repealing the subsidies. Begich and Landrieu represent states with large oil revenues.

This is the Republican politicians having their cake and eating it too. They pocket millions in Super PAC campaign support via Big Oil donations and they get to complain about the high price of gasoline.

In a recent CNN poll, 55% of those surveyed blamed the oil companies a great deal for the recent increase.

UPDATE: Think Progress points out: “The 47 senators voting against the bill have received $23,582,500 in career contributions from oil and gas.”