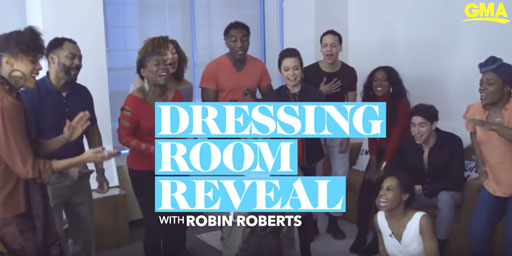 The cast of Broadway’s Once on This Island joined Good Morning America co-anchor Robin Roberts to discuss the revival of the musical and perform the show’s finale, “Why We Tell the Story.”

Ah. This gives me life.

Once on This Island unfolds as a group of storytellers, during a nighttime rainstorm, calm a young girl of their village with the story of Ti Moune, a Caribbean island country girl who falls in love with an aristocrat.

I love this show so much: the message, the music, the people.

And speaking of the people I love a lot :)…

T. Oliver Reid, the show’s dance captain, and I worked together in two Broadway shows – Chicago and Follies. As much as I’ve laughed through the years with T, I’ve also always enjoyed his talent and awesome work ethic. When you’re on stage with T, you know you better keep up!

And the wondermous and handsome Tony Award nominee Norm Lewis (Porgy & Bess, Phantom of the Opera, Side Show), who I’ve known for even longer than T., was playing the role of “Agwé,” god of water, when this was filmed.

So, double joy for me watching this clip.

Watch the gorgeous cast of Once On This Island perform “Why We Tell the Story” below and feel your spirit renewed.