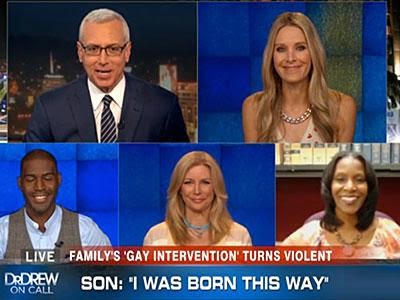 Daniel Ashley Pierce, whose coming out to his family turned into physical abuse resulting in his being “disowned” and thrown out of his home, was interviewed via phone by Dr. Drew Pinsky on HLN today.

Pierce was asked about his outlook at life having experienced both the ugliness of his family’s reaction and the widespread positive support he’s received, in part through a GoFundMe campaign set up by his boyfriend to help him get on his feet.

“I am so overwhelmed with joy,” Pierce told the panelists of the massive outpouring of support sparked by the video’s viral fame. “I am very blessed to have all of the comments and the messages and everything that everyone has done — the donations, all of that — has been a big surprise. It’s helping me get through the day.”

“I want to give a portion of it back to the cause,” Pierce said. “I’m going to get actively involved with as many organizations as I can. My main focus with the video was … I want to bring awareness that this is still happening. If it saves one kid the misery of what I went through, I will be satisfied.”

At this writing, the GoFundMe campaign – originally set up with a goal of $2,000 has raised more than $80,000. Pierce says he plans to use part of the funds to help other LGBT youth.