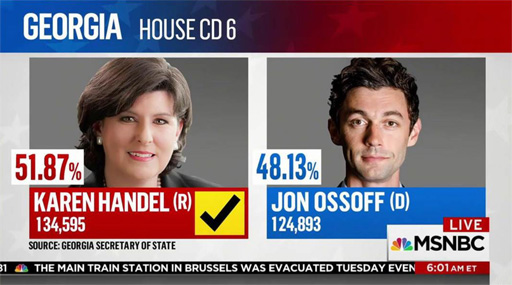 Republicans are elated, Democrats – not so much.

Often, a win is a win; a loss is a loss. But a few things come to mind:

• Ossoff received the same 48% he got in the April primary. Handel consolidated her base moving from about 20% in April to 52% last night. It’s possible that 48% is about as high as Dems can get in the district. You can’t create voters out of thin air.

• The one sliver lining for Democrats is that these special elections for Congressional seats in traditionally red states are much, much tighter than just months ago.

For example, when Republican Tom Price won the Georgia seat back in November, it was by 24 points. Handel clinched the win last night by only 4 points. That’s a lot of lost margin.

There was also a special election in South Carolina last night that received less coverage, and was even tighter. Mick Mulvaney won the 5th District seat in SC last November by 20 points. Last night, Republican Ralph Norman won the special election by only 3 points.

Similarly, Mike Pompeo won his seat in Kansas’ 4th District last November by 31 points; Republican Ron Estes took the seat in a special election this spring by a margin of only 7 points.

As you can see, there is some clear movement happening here. Will it be enough to make a difference come the fall of 2018 and the midterm elections? We shall see.

• While a lot has been made of the fund raising and money spent by the Ossoff campaign on this race, national Republican groups spent far more (nearly $14 million the NRCC, RNC, and Congressional Leadership Fund Super PAC) than national Dems did (about $6 million). According to NBC News, the total GOP price tag (NRCC, CLF, RNC) for the four recent special elections (Kansas, Georgia, South Carolina, Montana) was around $19 million versus $7 million for Democrats (DCCC, House Majority PAC, Patriot Majority).

What does that say? That Dems viewed the prospects of winning the traditional red seats pretty realistically, while the Repubs were clearly nervous.

Predictably, President Trump boasted about the Democrats loss this morning:

Well, the Special Elections are over and those that want to MAKE AMERICA GREAT AGAIN are 5 and O! All the Fake News, all the money spent = 0

Democrats would do much better as a party if they got together with Republicans on Healthcare,Tax Cuts,Security. Obstruction doesn’t work!

The comment about Dems working with Republicans in Congress is interesting in that the Repubs have literally shut the Dems out of any policy-making process.

More from the Twitterverse on last night’s election.

👉Jon Ossoff lost by a margin of 5 points

Tom Price won that seat by 24 points just 7 mths ago. There are 70 GOP House seats w/ more Democrats than GA-06. This was a strong showing. https://t.co/fs1boXDRO8