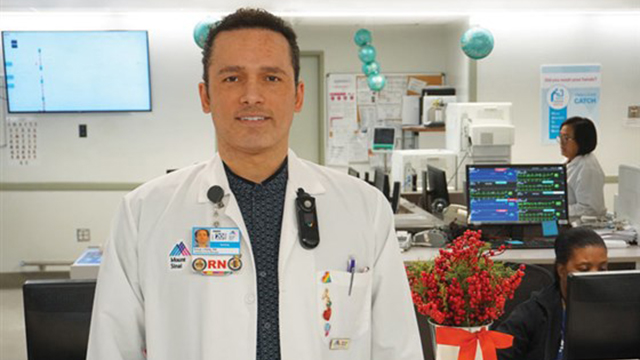 As the number of coronavirus infections has surpassed over 20,000 in New York City, an openly gay man has become the first nurse to die there from COVID-19.

Kious Jordan Kelly, 48, who worked as a nurse manager at Mount Sinai West in Manhattan, shared his diagnosis with his sister on March 18 from the intensive care unit via text message. He couldn’t call her because he was on a ventilator.

“I’m okay. Don’t tell Mom and Dad. They’ll worry,” he wrote to his sister, Marya Patrice Sherron, according to the New York Times. He passed away less than a week later on Tuesday evening.

“His death could have been prevented,” wrote Sherron. “I’m angry, He was healthy.”

Kelly’s co-workers also voiced their anger as well posting on social media channels that they didn’t have proper protective equipment (PPE) at their hospital as they worked with patients diagnosed with the virus.

Nurses from Mount Sinai shared a photo of healthcare workers wearing black garbage bags as makeshift protective clothing with the caption, “NO MORE GOWNS IN THE WHOLE HOSPITAL. NO MORE MASKS AND REUSING THE DISPOSABLE ONES…NURSES FIGURING IT OUT DURING COVID-19 CRISIS.”

“Kious didn’t deserve this,” one colleague told the New York Post. “The hospital should be held responsible. The hospital killed him.”

Nurses told the Post they were using the same protective equipment as they shifted from infected to non-infected patients since there weren’t any proper gowns available.

Lucia Lee, a spokesman for the hospital disagreed telling the Times, “This crisis is straining the resources of all New York area hospitals, and while we do — and have had — enough protective equipment for our staff, we will all need more in the weeks ahead.”

Mount Sinai issued a statement regarding Kelly’s death which read, “We are deeply saddened by the passing of a beloved member of our nursing staff.”

“This growing crisis has already devastated hundreds of families and turned our frontline professionals into true American heroes,” the hospital network said.

“Today, we lost another hero — a compassionate colleague, friend and selfless caregiver.”

Friends and colleagues have set up a GoFundMe campaign to help ease the financial burden to his family of covering funeral and transport costs.