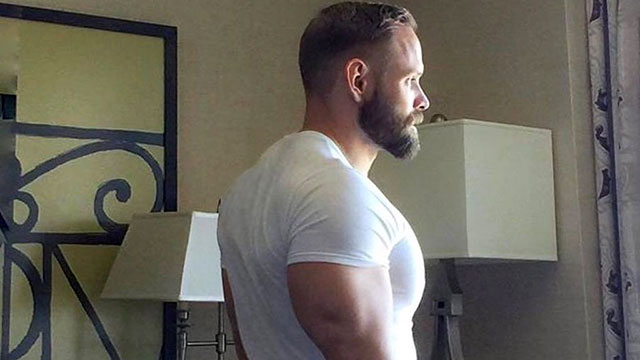 Dr. Jake Jacob, an openly gay physician, recently reflected on social media about his process of severing ties with the Mormon Church specifically his decision to stop wearing his ‘temple garments.’

Posting a photo clad in just a white t-shirt and briefs, the beefy doc shared with his 278K Instagram followers that it has been 12 years since he decided to stop wearing the ‘magic underwear’ noting “it made no sense since I was having sex with men which is a mortal sin against the Mormon church’s teachings.”

But rather than a sad moment of reflection, Jacob recalls the decision as “life-altering physically, emotionally, and spiritually.”

“It was my last physical reminder, for good or bad, of my ties to childhood religion,” he continued. “It was liberating for my body to finally remove the oppressive clothing that insisted I always stay covered instead of celebrating the body God gave me.”

For the hunky 39-year-old, shedding the garments represented discarding unnecessary shame and self-loathing that he’d carried for years about who he was and a part of himself that he “can’t and shouldn’t change.”

“It was a necessary step in overcoming years of conversion therapy that taught me I was broken and somehow God was supposed to fix me if I was righteous enough, an ever-moving impossible goal post,” he added.

Jacob also recalled the feeling of “sliding into my sheets without any clothes the first night I felt freedom I’d never experienced before.”

Being able to choose how he presented his body to the world began “a journey of loving my own body, embracing my flaws, of actually looking in the mirror and choosing to like what I see without guilt or forced ‘humility’ which I now know was the quest for impossible constant perfection of body and mind.”

The result was the beginning of loving himself “for who I am independent of a higher power’s approval or acceptance of my peers.”

With good and bad days in the rearview mirror, Jacob’s focus now is on the gratitude he feels having journeyed towards self-acceptance.

“I’m grateful I took a chance stepping into the unknown discovering a life I never dreamed could be so fulfilling,” he writes in closing.

Check out some other recent posts below and follow the body-conscious Jacob on Instagram here for more of his posts.