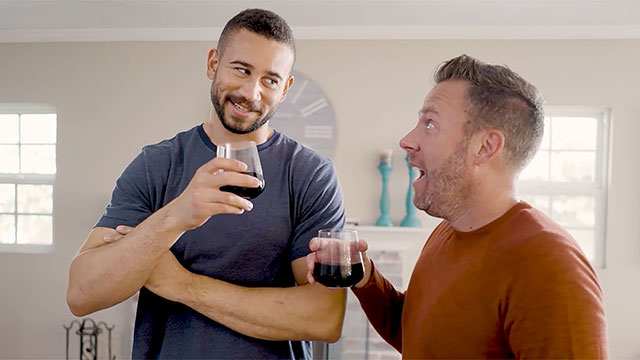 In the latest installment of the popular “Bad Boy” web series, Scott (played by creator/director Artie O’Daly) finally gets to have a date with potential boyfriend, Brian (Doug Rogers).

Scott has planned a lunch date at his house, and Brian shows up right on time with a bottle of wine. Although, the libation comes with an announcement.

Brian declares, “I’m just going to be up front, we’re not going to have sex.”

Scott’s hopes are clearly dashed: “Always a great start to any date.”

For folks who follow the series, every time Brian has dropped by to see Scott there’s always (and we do mean always) shenanigans going on with the wacky characters that make up the “Bad Boy” universe.

Hoping to finally get a chance to sit, chat, and get to know each other – “just the two of us” – Brian is surprised to see two caterers (Miki Yamashita and Eden Robledo) in the kitchen.

Or – are they REALLY caterers? Here we go…

While Scott goes to change clothes, Jim (Drew Canan) suddenly appears in the corner wearing a fake mustache. Clearly under the impression he thinks he’s invisible, Jim is surprised to find out Brian can SEE him.

Thinking on his feet, Jim tells Brian he’s a waiter and offers him a “whore-derve,” pointedly underscoring the word “whore.” Is Jim jealous?

But caterers “Mary Kate” and “Ashley” (not their real names but Jim doesn’t care) aren’t sure what to do with an unannounced assistant.

Scott pulls Jim aside wondering why Jim is planning to spy on his date.

Jim reminds Scott (and the viewers) that it’s been established that someone is apparently trying to kill Scott, so he’s there to…well, just be there.

Scott sends Jim off to practice being invisible (“Someone must be using a counter spell”) as he takes wine to Brian (“Bottoms up! I don’t mean me…”).

Cue the shenanigans including a punchy punch, “death garlic,” a Harry Potter-inspired fight scene, and of course, Jim loses his shirt along the way. Plus, there are a few more reveals regarding the murder mystery subplot.

The farcical aspect of the whole affair is what makes it fun as O’Daly’s script and dialogue just keeps moving whether is seems to make sense or not.

Hit the play button below. You can check out my previous coverage of the “Bad Boy” web series here.