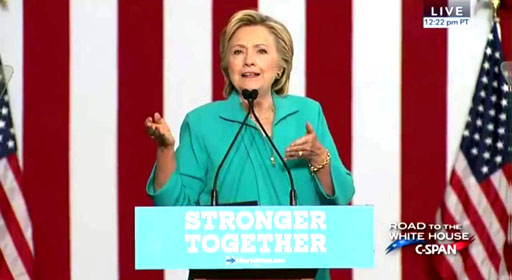 Throughout the speech, she calmly explains what the “alt-right” is – a loosely defined term for white nationalist and anti-immigrant sentiment – and how Trump is intimately connected to the extreme-right movement.

Speaking at a community college in Reno, Nevada, Clinton said Trump had brought a racist fringe into the “mainstream” in a way that no other major party nominee had in American history.

“Of course, there’s always been a paranoid fringe in our politics, steeped in racial resentment,” Clinton said, according to remarks released by the campaign before the speech. “But it’s never had the nominee of a major party stoking it, encouraging it, and giving it a national megaphone. Until now.”

Clinton also called out the fringe “alt-right” group by name as she produced examples of how Trump had amplified the voices of racist and misogynists:

I really encourage you to watch the speech in full. When you consider the Trumpster’s ranting and rave voice on the campaign trail versus the sure, steady focus of Clinton, it’s hard to imagine folks not voting Clinton.