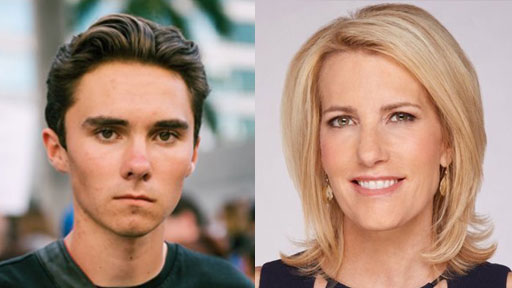 Hogg, a leading voice since the shooting and helped organize one of the biggest rallies in the history of the country, recently shared on his social media that he’d been turned down by four colleges.

Ingraham thought it would be wise to attack the kid.

How gross a human being do you have to be to attack a high school student because you don’t like his “politics?”

Personally, if I was a college/university looking at a student with a 4.1 GPA and all the leadership he’s shown the past several weeks since seeing his fellow students gunned down, I’d snap that student up.

Just a Fox News host attacking a school shooting survivor for getting rejected from colleges. What a world. https://t.co/i0HYUpLHgN

Laura Ingraham takes potshot at high school kid who was hunted down like an animal not a month ago. What is it with the modern GOP and kids? If they’re not fucking them, they’re stalking them. https://t.co/mFMTTX3jQU

Attacking a traumatized kid for a 4.1 GPA. Good on you #GOP. Keeping it classy always. Party of family values and all that…..

Don’t u hv anything g BETTER to do instead of TROLLING TEENAGER’S?!?

Reveling in the misfortune of a child is embarrassing even for you, Laura.

imagine being an adult who hates a teenager so much you pants him online for getting rejected by colleges https://t.co/RPw52nqq1h

Wow, Laura, did you ever think you’d be sitting on Twitter trying to burn teenagers? You must really be questioning your choices in life right now……

But, just so you know, Hogg has the fire to stand up to bullies. Note this from the past weekend:

I hope some of you had a great weekend golfing I had a great time marching with the American people.— David Hogg (@davidhogg111) March 25, 2018