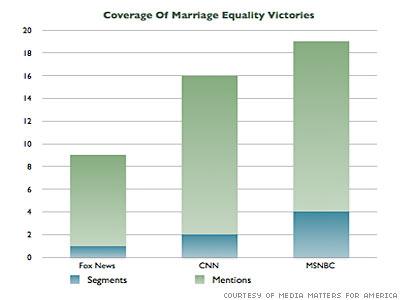 Media Matters notes that Fox News had little time for the marriage equality wins or Tammy Baldwin’s historic US Senate win in Wisconsin.

From November 6 to November 9, Media Matters combed through transcripts of CNN, MSNBC and Fox News for terms related to same-sex marriage. The organization determined that Fox News devoted far less time to the subject than it’s competitors – only one segment and nine mentions to the marriage equality wins, which marked the first time in history that American citizens voted in favor of same-sex marriage. When discussed by Fox newscasters, these victories were usually “bundled with other ballot initiatives,” rather than given individualized attention.

Media Matters also notes that Fox News failed to report on the election of Rep. Tammy Baldwin, the first openly gay candidate to win a seat in the U.S. Senate. By contrast, her election received in-depth coverage on the other networks.