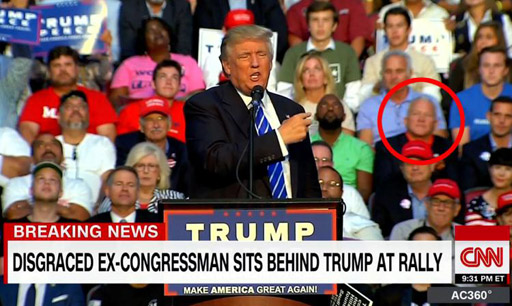 Donald Trump, speaking to a crowd in Sunrise, Florida, took off on a rant about Hillary Clinton speaking in Florida two days earlier where Clinton didn’t realize that seated right behind her at the rally was the father of Omar Mateen, the man who murdered 49 people at a gay club in Orlando this past June.

Important to note that when notified about Mateen’s attendance, the Clinton campaign said in an emailed statement, “The rally was a 3,000-person, open-door event for the public. This individual wasn’t invited as a guest and the campaign was unaware of his attendance until after the event.”

Nick Merrill, a Clinton spokesman said later, “She disagrees with his views and disavows his support.”

Trump razzed Hillary about the elder Mateen’s attendance, BUT – wait for it – seated just behind Trump, in a similarly visible seat as Mateen had had, was former GOP congressman Mark Foley who resigned in disgrace back in 2006 after sending a series of sexually explicit instant messages to several underage congressional page.

Check what Trump had to say about Hillary’s Mateen mistake with Foley right over his shoulder:

“Wasn’t it terrible when the father of the animal that killed the wonderful people in Orlando was sitting with a big smile on his face right behind Hillary Clinton? And by the way … a lot of the people here — how many of you people know me? A lot of you people know me,” Trump said, addressing the crowd behind him as Foley raised his hand.

“When you get those seats you sort of know the campaign, so when she said, ‘Well, we didn’t know,’ he knew, they knew.”

Hey Trumpster – you might check the house before you jump into your next routine.