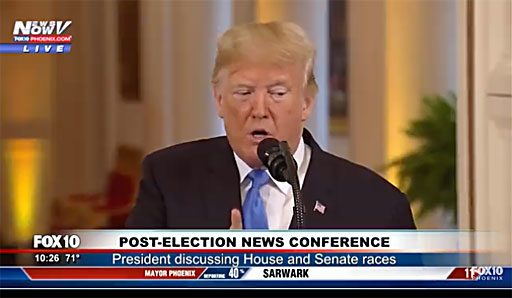 There were serious fireworks today at the White House as Donald Trump lit into CNN White House correspondent Jim Acosta who attempted to ask the Trumpster about his characterization of the migrants making their way from Central America to the U.S. border.

“I’ll tell you what. CNN should be ashamed of itself having you working for them. You are a rude, terrible person. You shouldn’t be working for CNN. You’re a very rude person.

Gee, do you think Trump is a little edgy after the takeover of the House by the Democrats?

Trump is not acting someone who thinks he just had a successful election— John Harwood (@JohnJHarwood) November 7, 2018

We need to crowdfund a statue of Jim Acosta.— JoeMyGod (@JoeMyGod) November 7, 2018

This era of bipartisan good feeling is off to a tremendous start.— Ben White (@morningmoneyben) November 7, 2018