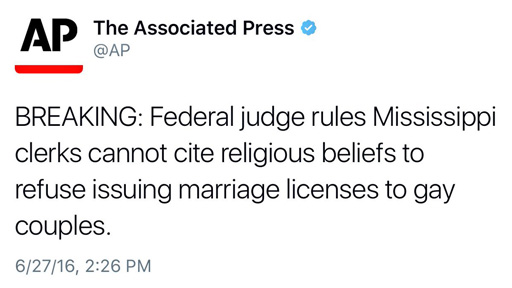 After the historic SCOTUS ruling last year which brought marriage equality to the entire United States, Mississippi passed a law as an attempted end-run around same-sex marriage allowing county clerks to recuse themselves from issuing marriage licenses.

A federal judge has ruled that law unconstitutional.

There was already a court order that stopped Mississippi from enforcing its ban on same-sex couples’ marriages. On Monday, the judge agreed to expand that order to address the so-called “recusal” provision of HB 1523, which was passed earlier this year and would go into effect on July 1.

“Having reviewed the relevant section of HB 1523, the parties’ arguments, and the scope of the Supreme Court’s ruling in Obergefell, the Court finds that [the recusal provision] may in fact amend Mississippi’s marriage licensing regime in such a way as to conflict with Obergefell,” the judge wrote.

Judge Reeves also addressed the idea of any ongoing disapproval over marriage equality after Obergefell:

“Mississippi’s elected officials may disagree with Obergefell, of course, and may express that disagreement as they see fit – by advocating for a constitutional amendment to overturn the decision, for example. But the marriage license issue will not be adjudicated anew after every legislative session.”