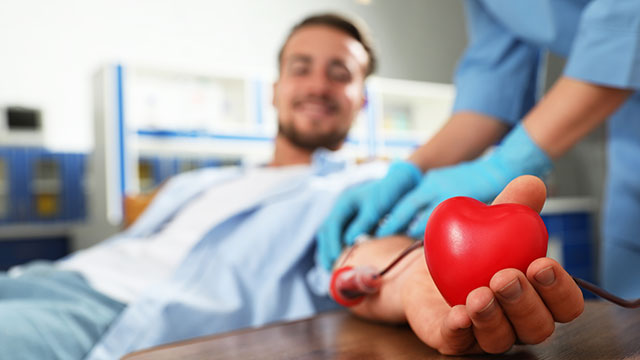 The current restrictions on gay and bisexual men wanting to roll up their sleeves and donate blood are back in the headlines this week amid reports of one of the worst blood crises in recent history.

The Red Cross announced on Tuesday that it had less than a one-day supply of critical blood types on hand declaring this the “worst blood shortage in more than a decade. The result is that some hospitals have been forced to defer patients from major surgery, including organ transplants.

Doctors are having to make tough choices about who receives transfusions and who has to wait. You can help by making an appointment to give at https://t.co/4JVikYXKuP or these 3 other ways. pic.twitter.com/TigqB4cVqk

Blood donations are down 10 percent since the beginning of the COVID-19 pandemic, according to the Red Cross. In fact, the pandemic has contributed to a 62 percent drop in blood drives at schools and colleges.

Where to find more blood donors? Well, gay and bisexual men could be a start.

The Williams Institute took a look at the problem and estimated the annual blood supply could increase anywhere from 2 to 4 percent (or 345,400 to 615,300 pints of blood annually) if the restrictions on gay/bisexual men were lifted.

Take a look at this important op-ed on blood donation. We've got a shortage and gay men should be able to donate. https://t.co/T94eMcMgBL#blooddonation @NealBaer

Currently, the Food and Drug Administration says men must abstain from same-sex sexual activity for 90 days in order to be eligible to donate blood.

The restrictions for gay and bisexual men go back to the early 1980s and the height of the AIDS crisis. In 1983, the FDA put a lifetime ban on men who have sex with men (MSM) from donating blood in an effort to keep the nation’s blood supply from being contaminated.

Those rules were kept in place for over 30 years until, in 2015, the lifetime ban was reduced to requiring a one-year abstinence from same-sex activity.In April 2020, the FDA adjusted the deferral period again from a full year to 3 months.

The Red Cross issued a recommendation on April 1, 2021, saying “blood donation eligibility should not be determined by methods that are based on sexual orientation.”

We have a blood shortage and it's a crisis, so I have led my colleagues to once again call on @US_FDA to follow science and end gay donor restrictions. https://t.co/81gNy8yG1f

With that in mind, 22 U.S. Senators – led by out Sen. Tammy Baldwin (D-WI) – sent a letter to Health and Human Services Secretary Xavier Becerra and acting FDA Commissioner Dr. Janet Woodcock urging the FDA to scrap the restrictions for MSM altogether.

“Any policy that continues to categorically single out the LGBTQ+ community is discriminatory and wrong,” the group wrote. “Given advances in blood screening and safety technology, a time-based policy for gay and bisexual men is not scientifically sound, continues to effectively exclude an entire group of people, and does not meet the urgent demands of the moment.”

Additionally, several Democratic members of the House of Representatives, including out Reps. Ritchie Torres (D-NY) and Mark Takano (D-CA), joined in calling on the FDA to remove the MSM donation policy.

🏥 This week, the French Health Minister @olivierveran announced that gay and bisexual men will be able to donate blood freely from March 16.

🚫 Under current rules, they must abstain from sex for a year before giving blood. pic.twitter.com/NYrUhD4Rvp

Some say there needs to be more scientific data to support scrapping limitations on MSM donating blood. The Red Cross understands those concerns and is doing something about that.

Acknowledging that “developing the scientific information that is needed to further change blood donor policies” can take time and effort, the Red Cross says it is taking part in a pilot program called Advanced Study (Assessing Donor Variability And New Concepts in Eligibility).

The study will gather data from volunteers in eight U.S. cities (Washington D.C., San Francisco, Orlando, New Orleans/Baton Rouge, Miami, Memphis, Los Angeles, and Atlanta). That information will be used to determine if a donor history questionnaire based on individual risk would be as effective as time-based deferral, in reducing the risk of HIV in the blood supply.

If you live in one of those metro areas, consider taking part in the study. For more information, click here.

And for those of you who live elsewhere, if you fit within current eligibility guidelines to donate blood, your help would be greatly appreciated.

✒️ Health minister @thanosplevris and the deputy @MinaGagaP signed a ministerial decree on Monday, scrapping a decades-old ban on blood donations by gay and bi men.

📰 It’s not yet known when the new rules will come into effect. pic.twitter.com/S5Ef2pdH6K