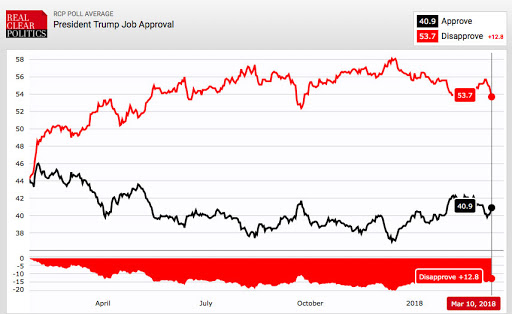 Donald Trump took to Twitter (where else?) to lie that news outlets aren’t touting his “around 50% approval rating” from pollsters like Rasmussen.

Real Clear Politics averages his approval at 41%. See graphic above.

These are all facts anyone can look up. Which, from the looks of Twitter, is what everyone did:

Trump today: “Rasmussen and others have my approval ratings at around 50%”

You Mr. President are FAKE NEWS!

No, Rasmussen says 44%. That’s six points lower than 50, and since it’s a Republican-leaning poll, it’s your best number. In other words, there are exactly ZERO polls close to 50. Do you understand what ZERO means?https://t.co/nYA3ONX43F https://t.co/dNy5A5LBdS

BTW, Rasmussen has Trump’s approval rating at 44%, which is not “around 50%” (it’s also exactly what Obama’s was on this day in his presidency, but Obama had a lower strong disapproval) https://t.co/J9pLhJCGlf