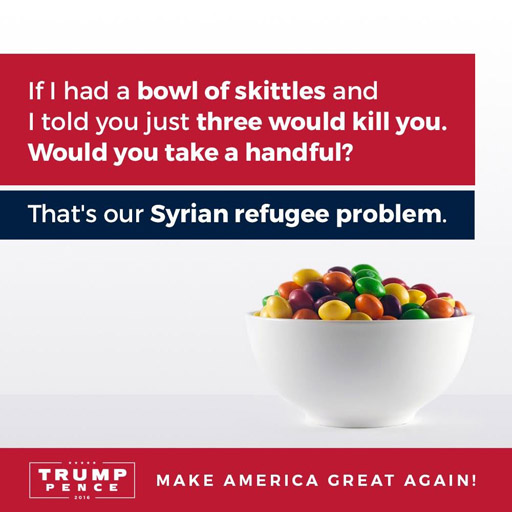 Recently, Donald Trump Jr. caused a firestorm on Twitter when he posted the above image with text which read, “If I had a bowl of skittles and I told you just three would kill you. Would you take a handful? That’s our Syrian refugee problem.

Aside from the sad punctuation, the message of dehumanizing innocent refugees from a war torn country

“If I gave you a bowl of skittles and three of them were poison would you still eat them?”

“Are the other skittles human lives?”

“Like. Is there a good chance. A really good chance. I would be saving someone from a war zone and probably their life if I ate a skittle?”

“Well sure. But the point-“

“I would eat the skittles.”

“I would GORGE myself on skittles. I would eat every single fucking skittle I could find. I would STUFF myself with skittles. And when I found the poison skittle and died I would make sure to leave behind a legacy of children and of friends who also ate skittle after skittle until there were no skittles to be eaten. And each person who found the poison skittle we would weep for. We would weep for their loss, for their sacrifice, and for the fact that they did not let themselves succumb to fear but made the world a better place by eating skittles.

Because your REAL question…the one you hid behind a shitty little inaccurate, insensitive, dehumanizing racist little candy metaphor is, IS MY LIFE MORE IMPORTANT THAN THOUSANDS UPON THOUSANDS OF MEN, WOMEN, AND TERRIFIED CHILDREN…

… and what kind of monster would think the answer to that question… is yes?”