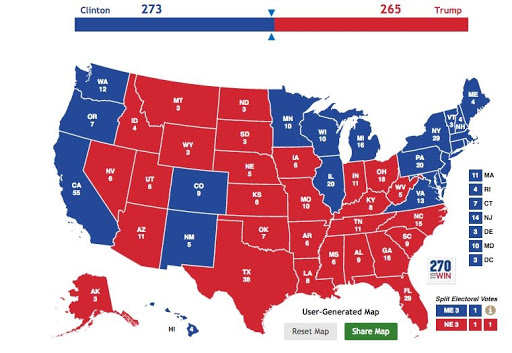 Huffington Post’s Sam Stein posits via Twitter that “If you assume that Colo, Va, Pennsylvania and NH are off the board — as #s suggest — then the election’s over.”

Recent polls show Hillary Clinton ahead in those vital swing states by an average of 11%, 8%, 9% and 8% respectively according to Real Clear Politics.

That takes Clinton to 273, past the winning 270 mark, without electoral vote rich states Florida or Ohio.

It’s notable, however, that Clinton currently leads in those states as well by smaller margins of about 3%. The latest CBS News Battleground Tracker poll puts Clinton up by 5% in Florida.