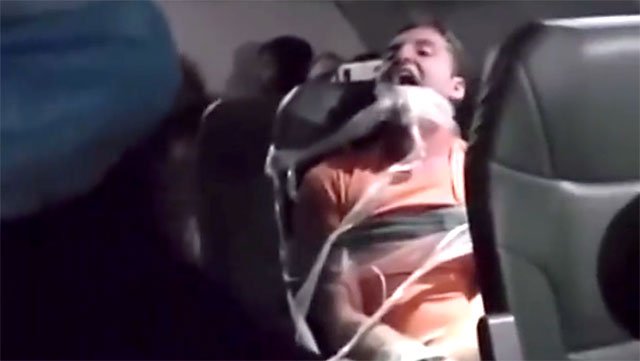 Max Berry, 23, who went viral last August as the ‘duct taped passenger’ after groping two flight attendants and punching another during a Frontier Airlines flight was sentenced to 60 days in jail followed by one year of supervised release.

Two of the flight attendants gave victim impact statements about how this experience has affected them. After the hearing, both victims said the 60-day sentence was not enough, but better than nothing. https://t.co/MxYxjXamr8

Max Berry pleaded guilty to three counts of assault within maritime and territorial jurisdiction and faced 1.5 years and a $15,000 fine.

Berry had been drinking on a Frontier Airlines flight in August from Philadelphia to Miami when he spilled his drink on himself and a flight attendant. Berry went to the bathroom and came out without his shirt.

As flight attendants tried to help him, he groped them.

A fight ensued and Berry was eventually restrained with duct tape. The incident racked up more than 13 million views online.

Berry wrote in a since-deleted tweet, “This will forever be the most dehumanizing experience in my entire life. Many people laughed and ridiculed me as I was mistreated by staff of a PROFESSIONAL airline. Just to make matters worth this has gone ‘viral’ on the internet and will never disappear. My life will never be the same.”

Berry’s attorney wrote in court documents that his client, who recently graduated from college, has struggled to find work “due to the tremendous media attention that this case garnered.” I guess that’s what happens when you become known as the ‘duct taped passenger.’

This was CNN’s report on the incident at the time:

#frontier #frontierairlines crazy it happened right beside, me it’s crazy out here pic.twitter.com/YdjURlSb5p