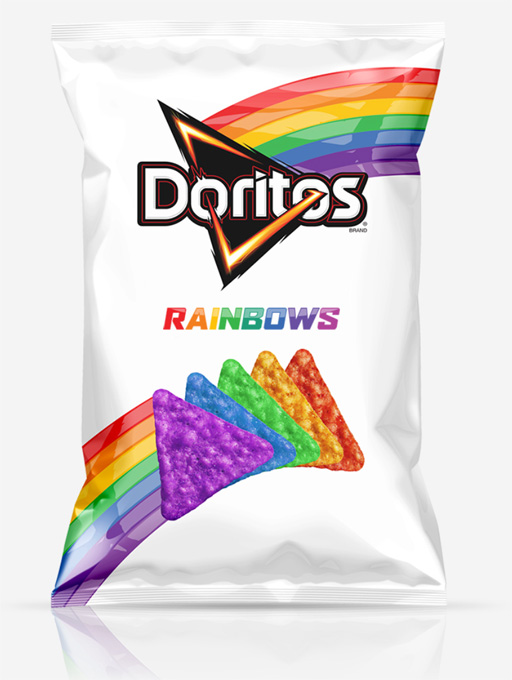 Pepsico owned snack company Frito-Lay announced earlier this week to team up with the It Gets Better Project to raise money for LGBT youth.

Donate $10 to the It Gets Better Project and in return you get your own bag of rainbow colored Doritos (inspired by the LGBT Pride flag) sent to your door.

Ram Krishnan, the chief marketing officer of Frito-Lay, stated that the partnership reflected the brand’s commitment toward LGBT equality.

“Time and again, our consumers have shown us, there really is nothing bolder than being true to yourself and living life to the fullest,” said Ram Krishman, chief marketing officer for Frito-Lay, in a statement. “With Doritos Rainbows chips, we’re bringing an entirely new product experience to our consumers to show our commitment toward equal rights for the LGBT community and celebrate humanity without exception.”

All of the funds raised go to It Gets Better Project, and good thing – the campaign sold out of bags of the tasty chips in one day! That’s $100,000 going to help LGBT kids.

Of course, there were the usual haters who can’t stand anything positive happening to the gays.

Sales will go to It Gets Better, a non-profit group started by the infamous anti-Christian bully and bigot Dan Savage. Savage has demanded Republican presidential contender Ben Carson to “suck his dick.” He’s demanded the same from Republicans Herman Cain and Mike Huckabee. Savage went on a smear campaign against Rick Santorum to destroy Santorum’s reputation in Google searches. The hate Savage has hurled at conservative Christians is practically endless. The rainbow color of the Dorito chips represent the LGBT rainbow flag, a symbol now widely seen as one of anti-Christian hate and bigotry.

There were also hateful things written over at Twitchy and Free Republic.

Isn’t that amazing? A company works to raise money to help kids, and they gotta slather their dark, ugly hate on it.

What you gonna do? Haters gonna hate.

Me? I’m reaching for a bag of Doritos 🙂