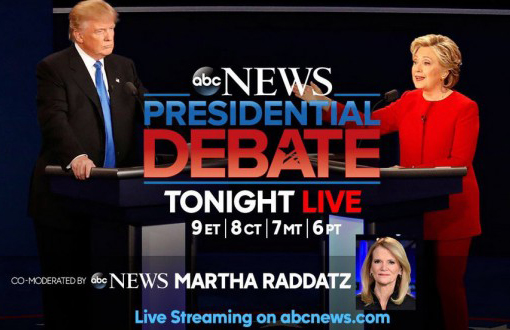 According to CNN, debate moderators Anderson Cooper and Martha Raddatz will bring up Donald Trump’s scandalous #PussyGate controversy right out of the gate tonight.

Hillary Clinton won the coin toss, so she will get the first question.

Former New York City Mayor Rudy Giuliani, a Trump campaign adviser and surrogate, told political news shows this morning that Trump will most likely apologize again for his crude language on the tape.

However, Trump has begun to resurrect via Twitter the allegations of Juanita Broaddrick (who has asserted then denied that Bill Clinton raped her in 1978)  in an attempt to deflect responsibility.

During the 90 minute town hall style debate, the moderators get to to choose the topics and audience participant’s questions. According to the Commission on Presidential Debates, all 40 of the voters attending the debate (chosen by Gallup) are described as “uncommitted voters.”

CNN also notes that the moderators will look to “to include topics that were not covered during the first debate, plus campaign storylines — like the Trump tape fallout — that have happened since then.”

The debate will air on all major networks beginning at 9PM ET/6PM PT.