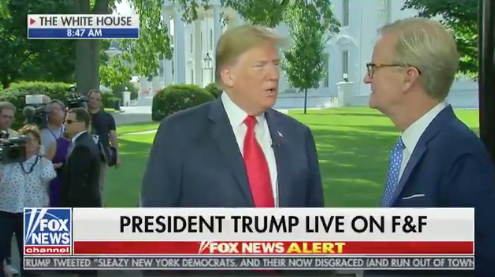 With Fox News morning show “Fox and Friends” airing from the lawn of the White House, Donald Trump strolled out to chat with host Steve Doocy Friday morning

During the interview segment talking about North Korean dictator Kim Jong Un, Trump shared that he he admires how North Koreans “sit up at attention” when their leader speaks and he wants “my people to do that same.”

Left out of that comment is the fact that Kim is a dictator who starves its own people.

“Hey, he is the head of a country and I mean he is the strong head,” Mr. Trump told Fox News’ Steve Doocy on the White House lawn Friday. “Don’t let anyone think anything different. He speaks and his people sit up at attention. I want my people to do the same.”

Trump later told a reporter said he was “kidding.”

Watch the clip below. There doesn’t seem to be any “humor” in his statement.

“He speaks and his people sit up at attention. I want my people to do the same.”

He said it clearly, without a hint of humor or irony or anything other than his immediate instinct. This is who he is, unscripted and raw and unprecedented. https://t.co/DCwsssrj5u

Funny how executing people who disagree with you causes your people to sit up straight and behave. https://t.co/YYT742Vm0j