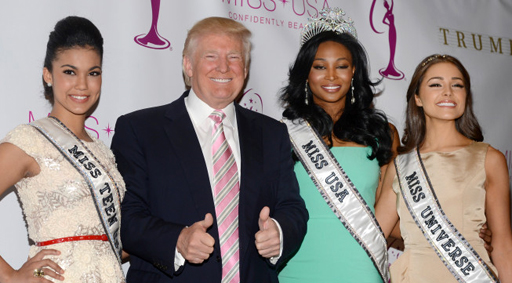 Republican White House hopeful Donald Trump has bragged in the past during interviews on The Howard Stern Show that, as the owner of the Miss USA Pageant, he would walk backstage before or after pageants while women were still dressing.

On an appearance on The Howard Stern Show in 2005, published on Sunday by CNN, Trump described going backstage at the beauty pageants while the contestants were undressed. “Before a show, I’ll go backstage and everyone’s getting dressed, and everything else, and you know, no men are anywhere, and I’m allowed to go in because I’m the owner of the pageant and therefore I’m inspecting it,” he said. “You know, I’m inspecting because I want to make sure that everything is good.”

“You know, they’re standing there with no clothes. ‘Is everybody okay?’” he continued. “And you see these incredible looking women, and so, I sort of get away with things like that.”

According to interviews BuzzFeed News conducted with former Miss Teen USA contestants, Trump did just that in 1997. Four women who were competing in the pageant that year — including one who was 15 at the time — recalled that Trump walked into the dressing area while they were changing.

One of them called it “shocking” and “creepy” and said she rushed to cover herself. Another recalled that the contestants were “just scrambling to grab stuff… whatever garments they had.”

Another called it “really shocking,” saying, “We were all naked.”

“I remember putting on my dress really quick because I was like, ‘Oh my god, there’s a man in here,’” Mariah Billado, former Miss Vermont Teen USA, said.

Billado remembered Trump saying something like, “Don’t worry, ladies, I’ve seen it all before.” Another who was 17 at the time recalled that it seemed Trump felt “it was his given right… because he owned the pageant.”

“At the time, you’re a teenager, you’re intimidated — it’s Donald Trump, he runs the pageant,” she said.

Think about that, kids. Your 14, 15 year old daughter takes part in a beauty contest and you have 59 year old Donald Trump barging in to get a look because he gets away “with things like that.”

We’re not talking about imaginary women with no names here. These are actual women coming forward.

And none of his followers will care.