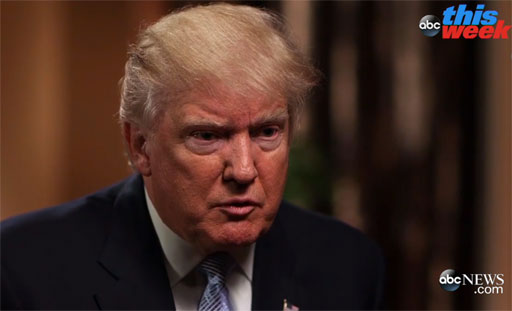 Responding for the first time to the father of a fallen Muslim-American soldier, Donald Trump told ABC News’ George Stephanopoulos that he has “sacrificed” by creating “thousands and thousands of jobs” and having “tremendous success.”

On the last night of the Democratic National Convention on Thursday, Gold Star father Khizr Khan, his wife Ghazala by his side, recounted to the crowd how his son was killed in 2004 by a car bomb in Iraq.

Khan also chastised Trump for seeking to ban Muslims from entering the country, saying that his son, U.S. Army Capt. Humayun Khan, would not have been able to serve under a Trump presidency.

“Go look at the graves of brave patriots who died defending the United States of America,” Khan said, addressing Trump. “You will see all faiths, genders and ethnicities. You have sacrificed nothing and no one.”

Trump appeared to try to brush the speech aside, saying that Khan “was, you know, very emotional and probably looked like a nice guy to me.”

Just so I’m clear: Donald Trump sees his “tremendous success” as equitable to the service of fallen American soldiers?