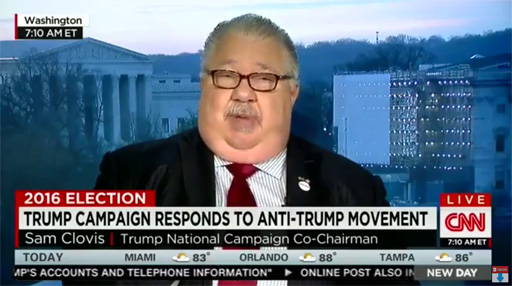 Team Trump is now writing the definitions of words in the English language.

On Friday morning’s New Day, CNN’s Alisyn Camerota asked Trump senior campaign adviser SamClovis to respond to Speaker Paul Ryan‘s scolding of Trump for the riots remark, and Clovis decided up was down, and down was up.

Clovis: “I don’t think he said violence, he said riots.”

Camerota:”Riots are violence, by definition.”

Clovis: “I don’t accept that.”

Clovis went on to say if Donald Trump isn’t named the Republican nominee at the party convention in July, he will leave the GOP forever.