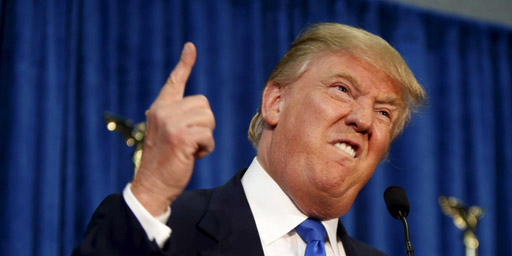 Donald Trump seems to think he can impose taxes at will.

Via the Trumpsters at Breitbart:

Republican presidential candidate Donald Trump said he would impose a 35% tax on any cars made in Mexico to keep companies from moving out of the US. Discussing a scenario where a car company wanted to build a plant in Mexico, Trump stated, “What would President Trump do? So I’d call the head of Ford, or whatever company, but I’d call the head of Ford. I’d say, ‘Congratulations, I understand you’re building a massive plant, in Mexico, and you’re taking a lot of jobs away from us in Michigan and other places. I don’t like that. I don’t like it. I just don’t like it.’ And he’ll say, ‘Well, Mr. President. It’s wonderful, wonderful for the economy. Oh, great, just great.’

“It’s wonderful for whose economy? Not for our economy. We lose on everything. We lose on jobs. We lose on money. We lose on everything. So, what I’d say is the following: ‘I don’t want you to do that. And if you do it, you’re not going to have any cars coming across the border unless you pay a 35% tax.’ That’s it. That’s it. No, that’s it! And they’re going to say — they’re going to say to me, ‘Mr. President, please, please, please.’ Now, I guarantee you. Let’s say I make this call at 9:00 in the morning, by 5:00 in the afternoon, I think the deal is done, they move back to the United States.”