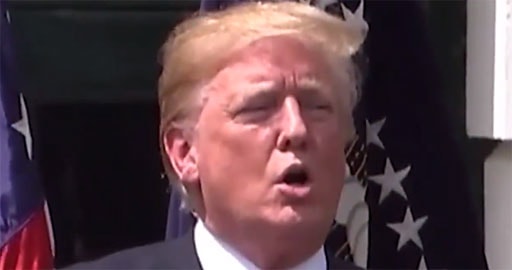 Last night, Donald Trump cancelled an event honoring this year’s Super Bowl champs, the Philadelphia Eagles, because only ten agreed to show up.

Trump is sooooo popular. #Not

The Philadelphia Eagles Football Team was invited to the White House. Unfortunately, only a small number of players decided to come, and we canceled the event. Staying in the Locker Room for the playing of our National Anthem is as disrespectful to our country as kneeling. Sorry!

As soon as Trump attacked the Eagles for “staying in the locker room” and being “disrespectful to our country,” folks chimed in rightfully noting that NONE of the Eagles’ players took a knee during the recent NFL season nor did they stay in the locker room to avoid the anthem.

NFL sources tell me ZERO members of the Super Bowl-winning @Eagles 🦅 team invited to the White House ever took a knee or stayed in the locker room during the national anthem to protest police brutality/racial injustice. https://t.co/78tuKwNK9u

FACT CHECK: Not a single @Eagles player took a knee or stayed in the locker room during the National Anthem last season, per NFL source. https://t.co/35VlL0zckl

Even the mayor of Philadelphia clapped back with a statement which read, in part, “Our President is not a true patriot, but a fragile egomaniac obsessed with crowd size and afraid of the embarrassment of throwing a party to which no one wants to attend.”

The White House folks had to scramble to put together a substitute event for the now uninvited Eagles. As you can see, Trump promised to play the national anthem “and other wonderful music.”

We will proudly be playing the National Anthem and other wonderful music celebrating our Country today at 3 P.M., The White House, with the United States Marine Band and the United States Army Chorus. Honoring America! NFL, no escaping to Locker Rooms!

One of the songs played at today’s event was “God Bless America” by the great Irving Berlin.

But, cameras rolling, it was soon apparent the Donald didn’t know the words.

By the way, according to Guardian journalist Bryan Graham, the event today  – with the national anthem and “God Bless America” – lasted a total of 8 minutes.

Trump unable to remember words to “God Bless America” at replacement event he commissioned to prove his patriotism: https://t.co/InkOxEwLcP pic.twitter.com/5PCO9DIydH

In fact, this isn’t the first time the Poser-In-Chief was revealed to not know the lyrics to our country’s songs. Earlier this year, the Trumpster was caught unable to even mouth the words to the national anthem.