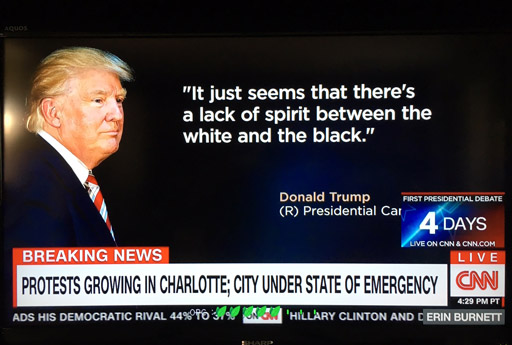 Ladies and gentlemen of the Republican party – your ‘brilliant’ presidential candidate.

His watered down, simplistic approach to this deep, complex, visceral issue is almost painful to read.

The quote, via CNN:

“It just seems that there’s a lack of spirit between the white and the black. I mean, it’s a terrible thing that we’re witnessing,” he said. “You are seeing it, I’m seeing it, and you look at what went on last night in Charlotte, a great place, and you just see it. There’s somewhat — and I see it even going out. There’s such a lack of spirit. There’s a lack of something, something that’s going on that’s bad, and what’s going on between police and others is getting worse.”

Trump went on to suggest stop-and-frisk as a viable tool to stopping crime in America.

In 2013, a federal judge ruled the practice was unconstitutional as data bore out that it unlawfully targeted blacks and Latinos.

Trump’s answer to America’s criminal and/or racial woes is to enact some version of an unconstitutional practice. As he attempts to woo the black vote, he’s saying “relinquish your civil liberties.”