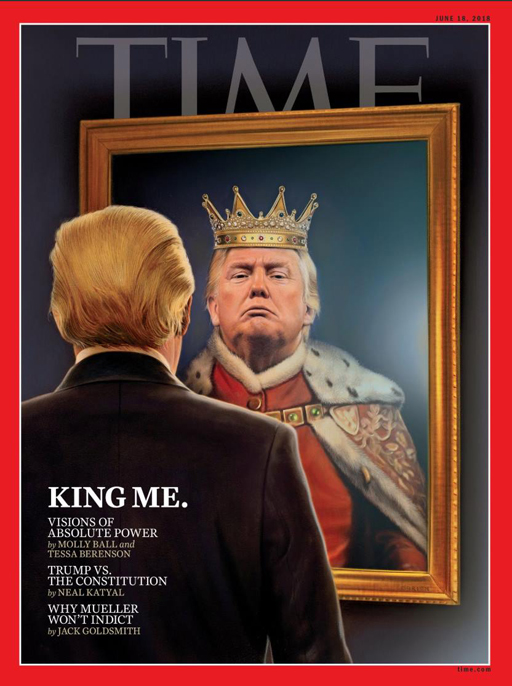 Donald Trump covers the latest issue of TIME Magazine with the title, “King Me.”

The in-depth article by Molly Ball and Tessa Berenson goes into the ongoing warfare between Team Trump and Special Counsel Robert Mueller’s investigation into Russian interference in the 2016 presidential election.

It’s a dangerous moment for Trump.

If he agrees to talk, the notoriously undisciplined President risks making a false statement, which could be a crime like the one that led to Bill Clinton’s impeachment.

But if he refuses, Mueller could issue a subpoena, instigating a long, high-profile court battle over whether Trump could be forced to testify.

The two legal teams–Mueller’s squad of top prosecutors and Trump’s rotating cast of advocates–are haggling over what an interrogation would look like: how long it would be, what topics would be on the table and whether the session would be recorded.

Before the President talks to investigators, Trump’s team wants to see the authorization letter that established Mueller’s authority, according to Trump’s lawyer Rudy Giuliani.

They are also demanding the special counsel’s report to be issued within 60 days of any interview.