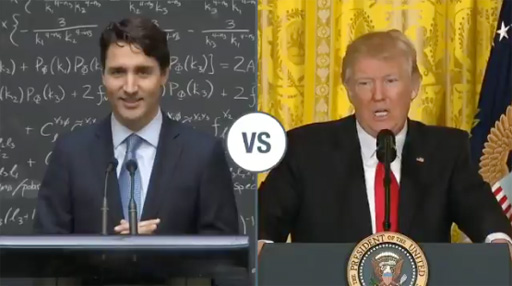 President Trump boasted at a private fundraiser in Missouri Wednesday of making up trade claims during a meeting with Canadian Prime Minister Justin Trudeau before knowing whether they were true.

Discussing trade relations with the U.S. ally, Trump lied about running a trade deficit. The Donald told his audience last night, “I didn’t even know.”

President Trump boasted in a fundraising speech Wednesday that he made up information in a meeting with the leader of a top U.S. ally, saying he insisted to Canadian Prime Minister Justin Trudeau that the United States runs a trade deficit with its neighbor to the north without knowing whether that was the case.

“Trudeau came to see me. He’s a good guy, Justin. He said, ‘No, no, we have no trade deficit with you, we have none. Donald, please,’ ” Trump said, mimicking Trudeau, according to audio of the private event in Missouri obtained by The Washington Post. “Nice guy, good-looking guy, comes in — ‘Donald, we have no trade deficit.’ He’s very proud because everybody else, you know, we’re getting killed.

As the audio recording became news this morning, Trump took to Twitter to repeat that the U.S. has a trade deficit with Canada.

We do have a Trade Deficit with Canada, as we do with almost all countries (some of them massive). P.M. Justin Trudeau of Canada, a very good guy, doesn’t like saying that Canada has a Surplus vs. the U.S.(negotiating), but they do…they almost all do…and that’s how I know!

However, the Office of the United States Trade Representative reported in 2016 that the United States exported $12.5 billion more in goods and services than it imported from Canada, leading to a trade surplus, not a deficit.

President Trump admits he made up facts during a meeting with Canadian Prime Minister Justin Trudeau, and @NBCNews has obtained an audio recording of those remarks. pic.twitter.com/kmm62IYENz

Bragging about lying to an ally. How stupid. How Trump. Even worse he didnt know we have a surplus https://t.co/20hjOMoqho

Good morning! The president just admitted that he attended a negotiation with the leader of our closest ally, was completely ignorant of the matter being negotiated, then just made some shit up to cover his ignorance. He then boasted about it all. https://t.co/Wx43jHsozW

Trump bragged that he made up facts in a meeting with the Canadian prime minister, Justin Trudeau.

I don’t know what is worse, lying to an ally or not knowing the facts in the first place.

Knowing if we have a trade deficit or surplus with a Canada is basic knowledge. pic.twitter.com/mDqBkQ5MjG