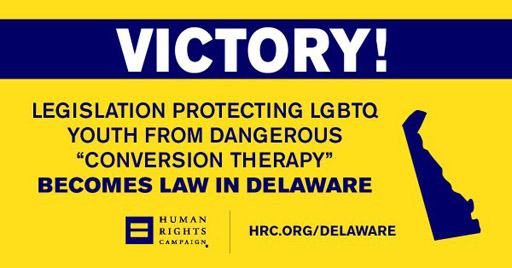 Delaware has become the 15th state to ban the harmful practice of so-called “conversion” or “reparative” therapy.

On Monday, Governor John Carney signed the bill that bans attempts to change the sexual orientation or gender identity of minors. The legislation considers conversion therapy “unprofessional conduct” for mental health and medical professionals. Any mental health professional caught practicing the ‘theraphy’ on a minor will find themselves subject to discipline.

All Delawareans, including Delaware children, deserve to be respected for who they are, and I was proud to sign Senate Bill 65 into law today.

Discredited practices like conversion therapy have no place in Delaware. pic.twitter.com/ljacguEZfd

The new law also contains language preventing the Department of Services for Children, Youth and Their Families from recommending “conversion therapy.”

During the legislation’s journey to becoming law, state Rep. Richard Collins (R-Millsboro) introduced an amendment that would have allowed conversion therapy if a patient were to request it. The amendment, fortunately, gained no traction and was soundly voted down.

HRC National Press Secretary Sarah McBride, a Delawarean herself, issued a statement which read, in part, “Today’s signing is a critical step forward in the fight to ensure that Delaware is a safe and affirming state for all LGBTQ youth, and we hope that the values and progress reflected in this law guide the ongoing conversation in Delaware about protecting LGBTQ students from discrimination.”

Additionally, over 30 cities and municipalities have banned the practice from being performed on minors.

See below a map from the Williams Institute showing where bans have been enacted as well as states with pending legislation. 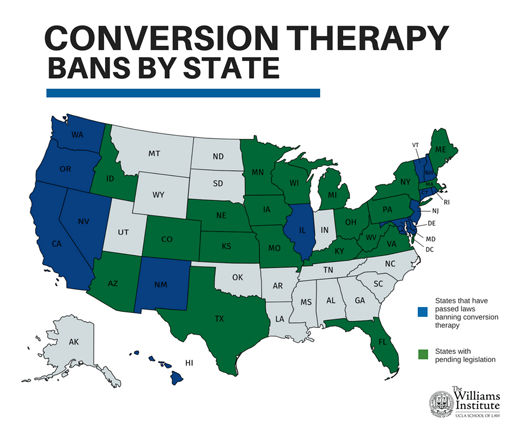