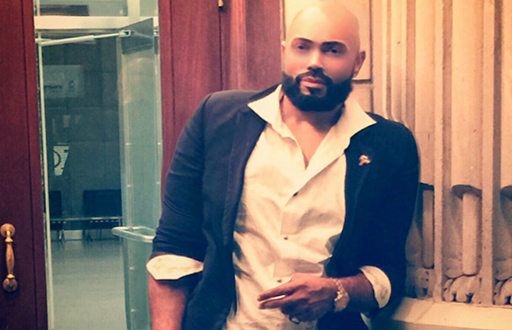 Bayna-Lekheim El-Amin, 42, was found guilty of attempted assault in the first degree, and assault in the second degree for his participation in a brawl last year at a Dallas BBQ restaurant located in the Chelsea area of Manhattan

Lawyers for El-Amin argued during the one-week trial that he was trying to protect himself from Jonathan Snipes, 33, and his boyfriend Ethan Adams, 26.

“This is a case of self-defense,” Percy Diego Gayanilo said during the Manhattan Supreme Court trial. “We are only here because they arrested the wrong person.”

Snipes started the altercation May 5, 2015 when he slapped El-Amin in the face with his purse after he thought he heard him use a racial slur.

An all-out brawl ensued and Gayanilo claimed that El-Amin tossed the chair at the men after Snipes menacingly reached for a knife from a table. This was not corroborated by surveillance video or witness testimony.

Prosecutor Leah Saxtein argued that Snipes’ loud mouth and purse-slapping histrionics didn’t justify the vicious beatdown. She told jurors that El-Amin attacked the men out of rage, not fear.

“The defendant was angry, he was humiliated, and he wasn’t about to let these girly men get the last word,” she said.

El-Amin was convicted of four counts of assault and attempted assault. He faces up to 15 years on the top charge.

The District Attorney’s office issued a statement that read in part:

“There was no justification for this brutal attack,” said District Attorney Vance. “Bayna-Lekheim El-Amin struck both victims in a public restaurant with a heavy wooden chair, knocking one of them unconscious. I commend the victims for their courage and my Office’s prosecutors for ensuring this defendant is held accountable for this horrific attack.”