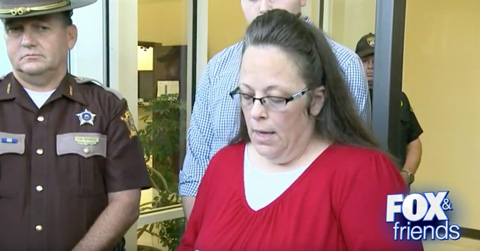 Returning to work today, Rowan County Clerk Kim Davis made a statement that she will not issue or sign any marriage licenses, but will not interfere with her deputy clerks from doing so.

“I am here before you this morning as I return to work to say that I love my lord Jesus, I love all people, and I love my job,” declared Davis. “I want to continue to serve all three as I have tried to do until now….”

“Effective immediately, and until an access is provided by those with authority to provide it, any license issued by my office will not issued or authorized by my me,” she explained.

“I want the whole world to know, no mistake about it, that my deputy clerks do not have the authority to issue a license whatsoever. If any of them feels that they must issue an unauthorized license to avoid being thrown in jail, I understand their tough choice and I will take no action against them.”

“Any unauthorized license that they will issue will not have my name, my title, or my authority on it,” she added. “Instead, they will say that they are issued pursuant to a federal court order.”

Shannon and Carmine Wampler-Collins were issued a marriage license by Rowan County Deputy Clerk Brian Mason this morning as “Christian” objectors inside the office shouted taunts of eternal damnation and “homosexual sodomy.”

But remember kids, Davis doesn’t hate anyone. She just wants to observe her religion in peace. Right?

Buzzfeed’s Dominic Holden notes that cheers went up for Mason as he processed the license.