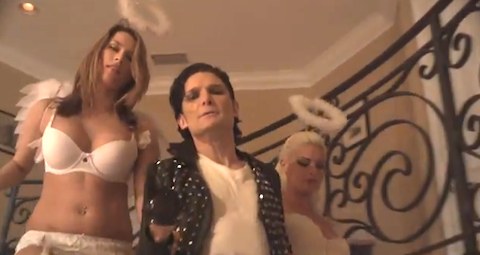 THE Corey Feldman apparently has a new song and music video that’s been deemed “Buzzworthy” on MTV.

I won’t hate on it – the only word I can find that seems appropriate is ‘fascinating.’ Take that as you will.

Join Corey as he takes you on a musical journey through his “Feldmansion” in this Day in the Life Adventure.

Flanked by 2 of “Corey’s Angels” he dances and sings his way through scenes featuring his pal Sean Astin from “The Goonies” to a MJ style dance sequence, and eventually to his recording studio which shakes and crumbles to become a concert Stadium where he performs.

Ascension Millennium (the brand new single from Coreys upcoming solo album) premiered on MTV on July 1st 2013 and within hrs had reached the coveted “Buzzworthy” status. Within its 1st week exclusively on MTV it gained 250,000 views world wide.

Now ITS YOURS! Welcome to the Dawn…..and ASCEND!