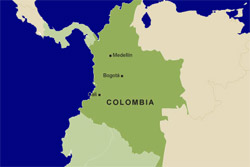 The Colombian Senate will vote on same-sex marriage today.

The Colombian Consitutional Court issued a ruling in 2011 (Sentencia C577/11) that requires the Congress to act by June 20, 2013, or else same-sex couples can present themselves to legal notaries to contract for their legal rights.

The Court ruled that same-sex couples have equal legal rights to found a family, but there is a “deficit of legal protection” for such couples under current law, and ordered the Congress to eliminate that deficit by June 20, 2013.

The Court previously ruled that the right given to heterosexual couples to a legally recognized non-marital union must be accorded to same-sex couples.