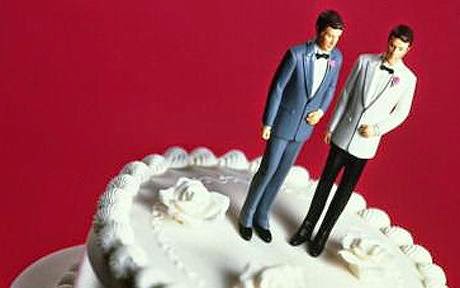 In a unanimous decision from the seven-member Colorado Civil Rights Commission, Jack Phillips of the Masterpiece Cakeshop was found to have violated civil rights law when he refused to make a wedding cake for a gay couple in 2012.

Today’s decision upholds  a previous ruling on the same lawsuit.

“I can believe anything I want, but if I’m going to do business here, I’d ought to not discriminate against people,” Commissioner Raju Jaram said.

Speaking to reporters after the ruling, Phillips said the decision violates his First Amendment rights to free speech and free exercise of his religion. “I will stand by my convictions until somebody shuts me down.”

Phillips added that supporters have been so supportive in buying cookies and brownies that he does not currently make wedding cakes.

The couple who sued Phillips, Dave Mullins and Charlie Craig, were pleased that the commission roundly rejected Phillips’ arguments. “We’re just thrilled by that,” Mullins said.

While gay marriage remains illegal in Colorado, the Colorado Anti-Discrimination Act prohibits public accommodations, including businesses such as Masterpiece Cakeshop, from refusing service based on factors such as race, sex, marital status or sexual orientation.

In what I imagine is an act of futility, Phillips was ordered to stop discriminating against gay people and to report quarterly for two years on staff anti-discrimination training and any customers he refuses to serve.

Phillips’ attorney indicated an appeal of the ruling to the Colorado Court of Appeals is being considered.